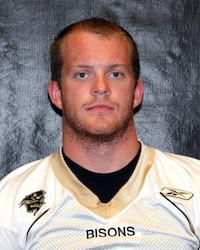 The Winnipeg native is only the fourth player to win the award back-to-back seasons, which is given to a player who exemplifies the attributes of academic achievement, football skill and citizenship.

Hall, 20, has had another amazing all-encompassing season with the Manitoba Bisons on and off the field. His nomination is highlighted by numerous endeavours that Hall has performed in the academic, community and athletic fields.

Hall was instrumental in creating a new annual event called “The Challenge for Life” for CancerCare Manitoba that has increased awareness for all cancers while raising over $3 million to date after only three years. Hall also volunteers his time at Siloam Mission, one of the largest homeless shelters in Winnipeg.

The award is named in honour of CFL Hall of Famer/Ottawa Rough Rider and McMaster University quarterback Russ Jackson.