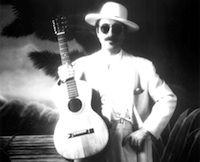 Redbone began his music career in the mid-1970s, playing mostly cover songs. His 30-year, 11 album career took him to all sorts of venues, including performing on “Saturday Night Live” and “The Tonight Show with Johnny Carson.”

In addition to receiving the 2010 Artistic Achievement Award, Redbone will perform at the Folk Festival’s Winter Wassail on Tuesday, December 2 — his only Winnipeg performance.

The Winter Wassail is the Winnipeg Folk Festival’s annual medieval-themed fundraising event in support of the festival’s Education and Outreach programs. In 2010 the festival provided training for 86 young performers and visual artists, 1,095 complimentary festival tickets to community organizations, and 21 free concerts in downtown Winnipeg with the help of its supporters.

Tickets for the Winter Wassail at the Winnipeg Convention Centre are $125 through the Winnipeg Folk Festival office at (204) 231-0096. A tax receipt will be provided.