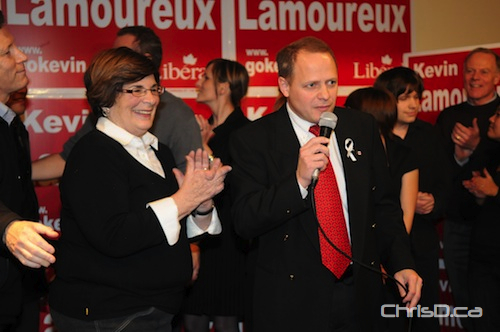 Newly-elected Winnipeg North Liberal MP Kevin Lamoureux, with Winnipeg South Centre Liberal MP Anita Neville by his side, speaks to the crowd of supporters at his campaign headquarters after being declared the winner of the by-election on Monday, November 29, 2010. (RON CANTIVEROS / FILIPINO JOURNAL)

After weeks of campaigning with a platform to get tough on crime, Liberal Kevin Lamoureux won the Winnipeg North seat in Ottawa during Monday’s by-election.

The former MLA was up against Aboriginal community activist and NDP candidate Kevin Chief, who was running to hold on to the NDP seat left vacant by Judy Wasylycia-Leis.

Conservative candidate Julie Javier came in a distant third with 1,645 votes. Javier was criticized during the campaign for not participating in candidate forums and not making herself accessible to the media.

Over in Dauphin, Conservative Robert Sopuck won in the area’s by-election with 8,176 votes over NDP candidate Denise Harder and Liberal Christopher Scott Sarna.