Report Finds Majority of Nations to be ‘Water-Stressed’ by 2025 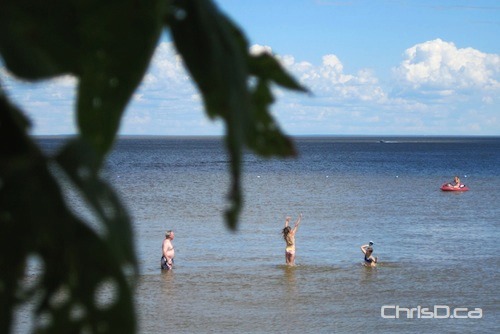 A group of people enjoy a swim at Winnipeg Beach on the shores of Lake Winnipeg in this July 18, 2010 file photo. (CHRISD.CA)

A new report being released this week says two out of three nations worldwide will see a water shortfall by the year 2025.

The report is being brought forward at the Lake Winnipeg Water Summit, which gathers the most creative minds from government, business, civil society and academia for the two-day “Lake Winnipeg Basin Summit / Our Lake Our Solutions” conference today and Wednesday.

The report, titled Water and the Future of the Canadian Economy, will be presented in Winnipeg and was authored by the Innovolve Group. Dr. Anthony Watanabe, president and CEO of Innovolve, is the keynote speaker today and will be presenting the report — funded in part by the RBC Blue Water Project.

Other findings in the report include water’s annual measurable contribution to the Canadian economy ranges from $7.5 billion to $23 billion, and that the global water industry is projected to reach US $1 trillion by 2020.

The Lake Winnipeg Foundation’s Red Zone II public forum starts at 7:15 p.m. at the IMAX Theatre at Portage Place. The public is invited to attend to learn about the health of Lake Winnipeg. Former Manitoba premier Gary Filmon will act as moderator.