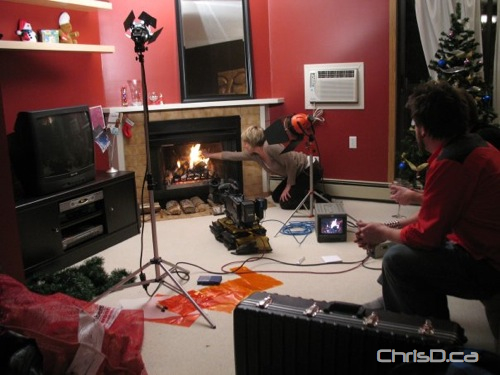 Shaw's annual Holiday Fireplace is back. Subscribers can watch it for free, or via Video on Demand for 99 cents, with all proceeds going to charity. (KIM BABIJ / SHAW TV)

It’s become a holiday tradition, and as of Monday, Shaw’s annual Holiday Fireplace began flickering into homes across the country.

The peaceful looped display mixed with Christmas music can put anyone into the holiday mood with a click of the remote.

Shaw subscribers can tune in on channel 301 and order it via Video on Demand for 99 cents, with all proceeds going to the company’s charitable “Together is Amazing” campaign. Shaw will match all proceeds and donate them to local charities in 2011.

A free version will be available shortly on channel 165 in SD and channel 212 in HD.

On the local front, the fireplace will also be airing on channel 9 beginning on Christmas Eve until January 2, with cut-ins from Winnipeg personalities with their “Best of Shaw TV” segments. Christmas music will also commence December 1 on weather channel 48.

MTS TV subscribers were treated to a similar fireplace last year, but a company spokesperson couldn’t immediately confirm whether it would be returning this season.

UPDATE: December 1 — MTS TV customers can view the fireplace through MTS Video On Demand December 1 through January 15. Customers can choose between two natural crackling fire sounds and two yuletide blazes featuring holiday music. The fireplace is also available to mobile users under the ‘Fun Stuff’ menu of their mobile browser and online.