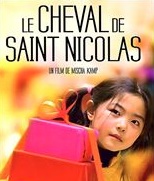 Want to brush up on your French speaking skills? Freeze Frame and CCFM are presenting a screening of “Le Cheval de Saint Nicolas” at the Franco-Manitobain Cultural Centre on Sunday.

The film follows Winky Wong, a Chinese girl who has just moved to Europe with her family and copes with the change with the help of her wild imagination. Everything is new to six-year-old Winky and she must learn a new language, make new friends and adapt to a new school. At first it’s difficult, until she learns about Santa Claus. She goes to great lengths to make sure Santa brings her the only thing she wants for Christmas: a horse.

The screening will begin at 2 p.m. in Antoine-Gaborieau Hall. Admission is $4 for children 12 and under, $6 for adults and $15 for a group of four.