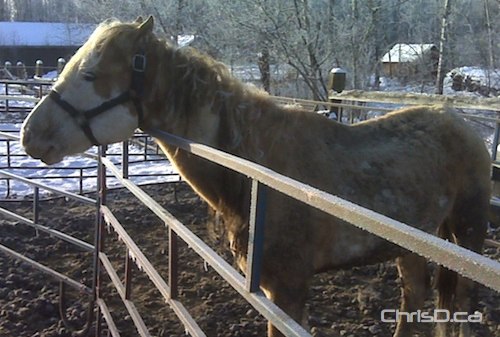 Several animals were seized from this farm in the RM of Swan River on Wednesday, December 1, 2010, over allegations the owner neglected the animals. (RCMP HANDOUT)

An animal cruelty investigation in the RM of Swan River has led to the arrest of a 68-year-old man.

RCMP received a tip of the alleged animal abuse on a farm on November 27. Police, along with local animal control officers, veterinarians and provincial staff, moved in on December 1 and seized 27 dogs, 15 horses and two donkeys from the property.

Investigators found the animals to be neglected, unhealthy and not properly cared for.

A local area man was arrested and released. He will make an appearance in Swan River court on January 5, 2011 to face animal cruelty charges. Until formal charges are laid, his name will not be released.

UPDATE: Wednesday, December 8 — RCMP have charged 68-year-old Walter Goba of the RM of Swan River with 44 counts of causing damage or injury to animals. He is scheduled to appear in Swan River court on January 19, 2011.