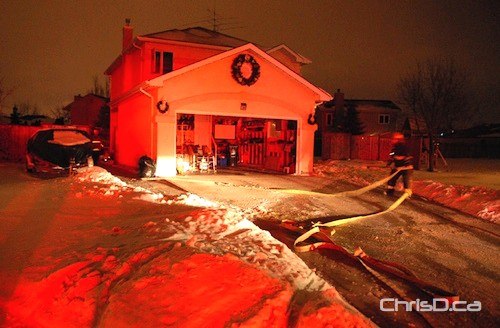 Firefighters extinguished a fire at 39 Deepwater Cove on Wednesday, December 8, 2010. There were no injuries. (STAN MILOSEVIC / MANITOBAPHOTOS.COM)

A basement fire in northwest Winnipeg had the attention of the neighbourhood Wednesday night, as crews responded to 39 Deepwater Cove just before 8 p.m.

Smoke could be seen billowing out of the home’s windows, as firefighters worked to put out hot spots on the property, located between Jefferson Avenue and Leila Avenue.

There was no one inside the two-story residence at the time and no injuries were reported. However, the photographer who took the above shot says the male homeowner required an ambulance for chest pains when he returned and saw the damage to the home.

No word yet on what might have started the blaze.