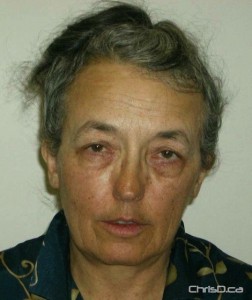 Manitoba RCMP are continuing efforts to identify a woman found deceased at a recycling facility north of Winnipeg last week.

On Monday, RCMP released a sketch of the woman they believe was found in a recycling bin in Winnipeg and later transferred to the BFI sorting facility in the RM of Rosser. Police say the woman may have gone by the name “Laura.”

Now investigators have released a photo of the woman (left), along with further details on her past. It’s believed the unknown woman’s mother may be a retired teacher living in the Saskatoon area, and “Laura” may have been raised on a farm nearby.

She may also have gone by the name “Dale,” but that could also be a surname.