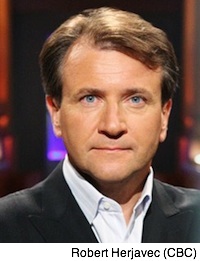 One of the stars of the CBC reality TV series “Dragons’ Den” will speak at an upcoming gala event in Winkler.

Robert Herjavec and his family left Croatia when he was only eight, sailing to Canada in hopes of a better life. They arrived in Toronto with no job prospects and only $20 to their name.

Today, Herjavec is living the dream of many aspiring Canadian entrepreneurs, sitting as president of his own company, The Herjavec Group, and being named as one of the country’s 100 Fastest Growing Companies three years in a row by Profit Magazine.

Besides “Dragons’ Den,” Herjavec also stars on ABC’s “Shark Tank,” a similar formatted show that invests in entrepreneurs and their ventures.

Herjavec will be the guest speaker at the Winkler Chamber of Commerce’s 2011 Gala Dinner and P.W. Enns Business Awards Evening on Thursday, April 14, 2011.