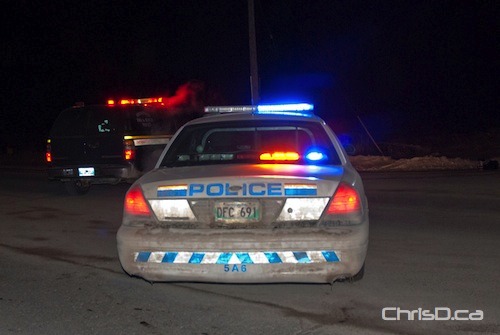 RCMP block a portion of Highway 15 near Highway 207 on Wednesday, December 15, 2010 after a fatal two-vehicle accident. (TED GRANT / CHRISD.CA)

A two-vehicle crash in the RM of Springfield late Wednesday afternoon has killed a man.

RCMP say the accident happened at about 5 p.m. on Highway 15 near the junction of Highway 207.

A compact car and a pick-up truck collided head-on, killing the driver of the car at the scene. The driver and passenger of the truck were taken to hospital with undetermined injuries.

The name of the deceased hasn’t been released.

UPDATE: Thursday, December 16 — The deceased has been identified as a 42-year-old Winnipeg man. RCMP say he was travelling westbound in a 2006 Hyundai Sonata. An eastbound travelling 2006 Dodge Ram pick-up with a 77-year-old man and a 62-year-old woman, both from Anola, was the other vehicle involved. The woman was taken to hospital with undetermined injuries.

Alcohol is not considered a factor in the crash.