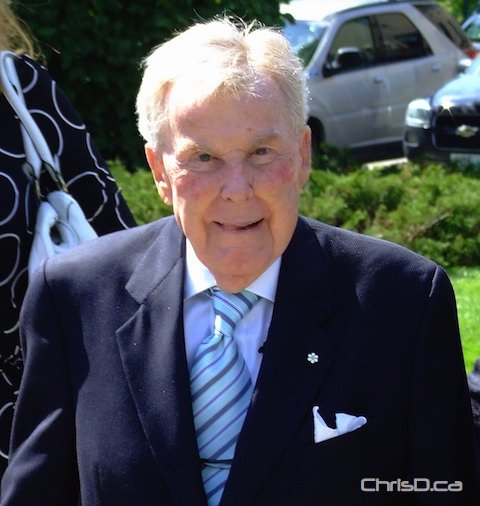 Former Manitoba Premier Sterling Lyon, as shown in this August 4, 2009 file photo during an event at the Manitoba legislature. (MARC EVANS / CHRISD.CA)

Former Manitoba Premier Sterling Lyon has passed away after battling a brief illness. He was 83.

In a statement issued by his family on Thursday, they said, “Dad was deeply committed to public service and known for his strong will in pursuit of the public good. But as his family we were always blessed to know him as a devoted and loving husband, father and a grandfather.”

Lyon passed peacefully at the Grace Hospital this morning.

The law school graduate also worked as a reporter for the Winnipeg Free Press early in his career, then as a Crown Attorney.

The Progressive Conservative is survived by his five children, Nancy, Andrea, Peter, Jennifer and Jonathon, and his six grandchildren. His wife, Barbara, passed away in 2006. The couple married in 1953.

Premier Greg Selinger expressed his condolences in a statement, which reads in part, “In politics, his eloquence and debating skills in the Legislative Chamber set a standard many politicians often strived to achieve but which few if any ever met. From his first entry into public life in 1958, Sterling Lyon was recognized as a man of great purpose and someone who had an unwavering belief in the future of Manitoba.”

Conservative leader Hugh McFadyen said in a statement, “This distinguished Canadian served the people of our province for over 40 years. The thoughts and prayers of my family, the Manitoba PC Caucus and party members are with his family at this time. I offer them our sincere condolences as they mourn his passing and celebrate a remarkable life.”

Funeral arrangements will be announced shortly.