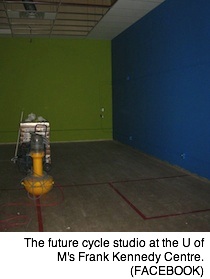 The Frank Kennedy Centre at the University of Manitoba received $726,649 in January of this year to begin an extensive renovation project.

With upgrades expected to be completed by March 2011, work is well underway at the sports facility almost a year later.

Among the new features is an indoor cycling studio with state of the art exercise bikes, a circuit training studio for aerobics and resistance training programming, a recreation room designed for yoga, palates and just to kick back, and upgraded change rooms and showers.

An expansion of the climbing wall and the addition of two basketball hoops to Gold Gym will also be included.

Bison Sport and Active Living says renovations are nearing completion and should be right on schedule to be finished in March.