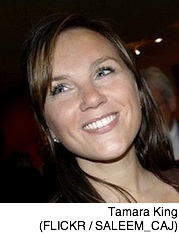 King previously worked at the Sun from 2005-2007, and will be taking over the very busy crime beat.

She replaces Chris Kitching, who moved to Toronto a few weeks ago, and was most recently crime reporter.

← Previous: Senior Arrested for Snooping in Neighbour's Garage Next: Top 5 MPI Frauds of 2010 -- Who's Been Naughty This Year →
Tags: Winnipeg Sun