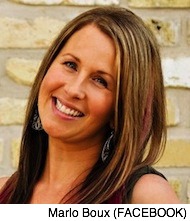 Boux co-hosted the popular “Greg and Marlo Show” with Greg Glatz on CJOB until its last broadcast on November 28.

“GirlTalk” — which is self-explanatory just by the title — will feature women’s issues and women’s voices.

To prepare for the launch, a commercial is being cast and four women between the ages of 25-65+ are needed.

The shoot is scheduled for mid to late January in Winnipeg. More details will be made available next month.

If you’re interested, send an e-mail to Marlo with your particulars as soon as possible.