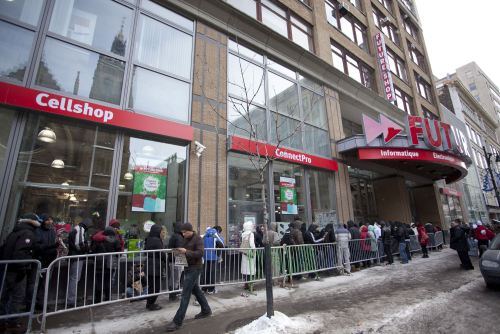 Eager Boxing Day shoppers gather outside the Montreal Centreville Future Shop in anticipation of the sale of the year. Thousands of customers waited for hours at Future Shop stores across the country in hopes to snag Boxing Day deals on December 26, 2010. (CNW GROUP / FUTURE SHOP)

Retailers cashed in to kick off Boxing Week Sunday, as stores across and country made millions of transactions the day following Christmas.

Consumers lined up outside Future Shop’s Winnipeg stores, where some even gave up dinner with family on Saturday to be the first ones in line at the St. James location.

Sister retailer Best Buy was having similar success, tracking more than 2.5 million visits to its website between December 24 and December 27.

In a year where the market was uncertain and a Canadian dollar at par with the U.S. greenback, retailers slashed prices deeper than ever before — up to 70% off depending where you shopped.

Several Winnipeg stores had North Dakota and Minnesota licence plates in the parking lot, creating a similar shopping environment to Black Friday south of the border, which attracted Canadians in November.