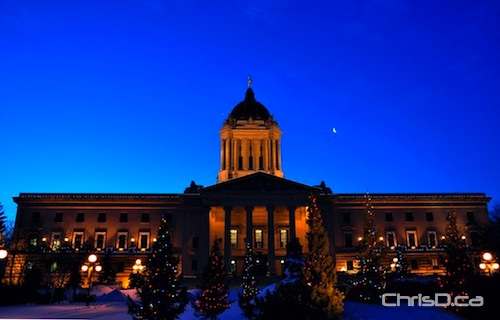 The Manitoba Legislative Building as seen in the early morning hours of December 30, 2010. (MARC EVANS / CHRISD.CA)

A New Year’s Day tradition will continue on Saturday as Manitoba Lt.-Gov. Philip Lee and his wife, Anita, host a public levee at the Manitoba legislature.

Weather permitting, January 1 will include complimentary sleigh rides around the Legislative Building, and members of the Manitoba Living History Society and the United Empire Loyalists Association will attend in heritage costume.

Entertainment will include a traditional Chinese lion dance and performances by fiddler Michael Audette, harpist Janelle Nadeau and the Winnipeg Police Service Choir.

Donations of canned and dry food for Winnipeg Harvest will be collected in the front lobby of the legislature.