Home » Photos » Airborne on New Year’s Day, and Anyone Up for a Swim?

Airborne on New Year’s Day, and Anyone Up for a Swim? 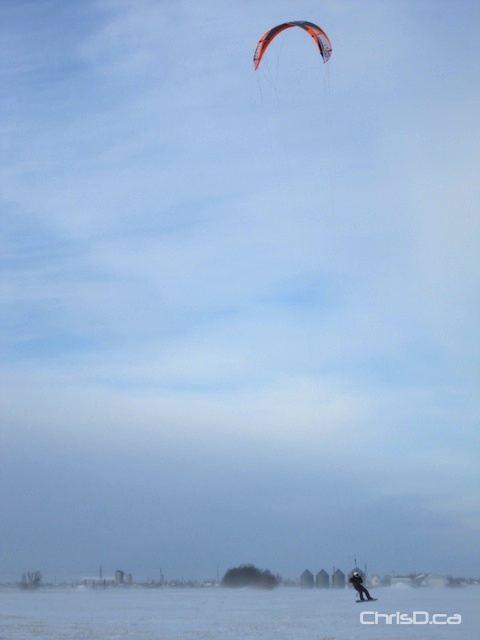 There was more than enough wind on New Year's Day for this snowkiter to get some air in a field south of Winnipeg. The winter sport is gaining popularity, as riders use kite power to glide on snow and ice. (CHRISD.CA)

Cold enough for you? The chilly temperatures on Saturday kept many people indoors, opting for warmer activities, like a Manitoba Moose game (they lost 3-2 to the Chicago Wolves, by the way.)

The toboggan run at FortWhyte Alive had a few brave souls out there, but was quiet for the most part, according to staff. Movie theatres? They were packed. Parking lots were full across the city, as many stores were closed, leaving not much else to do. Luckily, the windchill won’t be a factor today, as winds are forecast to be minimal at only 5 km/h. The temperature will also be more favourable than yesterday, reaching a high of -17°C with sunny skies.

Hopefully the stranded Canadians south of the border will be able to make it home today. Interstate 29 in North Dakota reopened Saturday afternoon from Grand Forks to the Canadian border. The North Dakota Department of Transportation and North Dakota Highway Patrol made the call just before 4 p.m., making it possible for motorists to begin their trek home. The highway was shutdown earlier this week after a massive snowstorm pummelled the area, causing a 100-vehicle collision.

However, I-29 remained closed from the South Dakota border to Grand Forks by early Sunday. On Friday, I-94 from Fargo was also closed, making for many Winnipeggers to vent their frustration on Facebook and Twitter.

Despite the road closures and blistery winter weather, revellers in New York took part in an annual New Year’s Day tradition by jumping in the Atlantic Ocean for a swim as part of the Coney Island Polar Bear Club. Brrr! But, don’t give them too much praise. It was a balmy 10°C in NYC on Saturday.