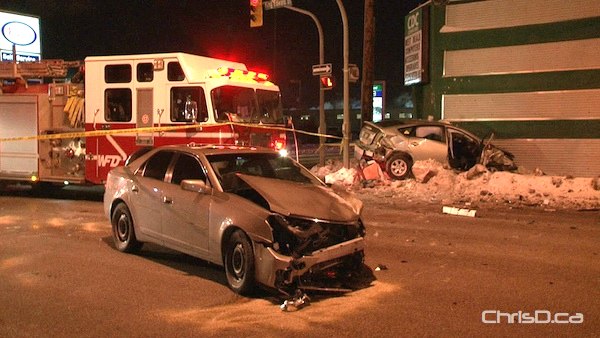 Two vehicles sit at the corner of Sargent Avenue and King Edward Street after a serious accident on Monday, January 3, 2011. (SHAUN MCLEOD)

Winnipeg police say the two-vehicle collision happened at about 6:30 a.m. at the intersection of Sargent Avenue and King Edward Street.

Police say the Duffy’s taxi was heading southbound on King Edward at the time. The other vehicle involved was travelling eastbound on Sargent when they collided.

The 57-year-old male taxi driver was transported from the scene in critical condition, but later upgraded to stable.

His 24-year-old male passenger and the 21-year-old male driver of the other vehicle were also taken to hospital. Both are listed in stable condition.

Traffic in the area was blocked off as police investigated.

A few blocks away, police were tending to a reported 12-car pileup on the St. James Bridge, which occurred at about 9:15 a.m. due to slippery road conditions.

Updated at 3:07 p.m. with further information.