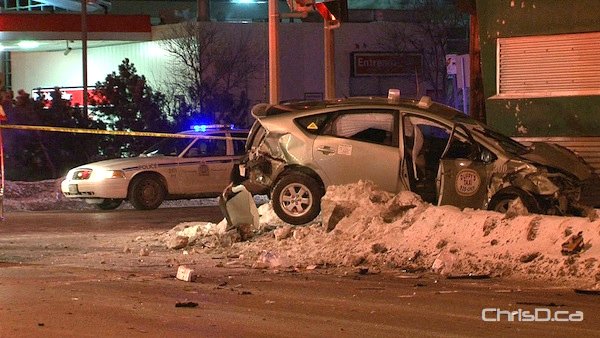 The driver of a Duffy's taxi who was involved in a two-vehicle crash on Monday, January 3, 2011 has died. (SHAUN MCLEOD)

The taxicab driver involved in a crash Monday morning has died of his injuries.

Paul Sodhi, 57, crashed his cab at the corner of Sargent Avenue and King Edward Street at about 6:30 a.m.

Police say the cab was heading southbound on King Edward at the time, when it was involved in a collision with an eastbound vehicle on Sargent Avenue.

Sodhi was rushed to hospital in critical condition, and later upgraded to stable. On Wednesday morning, he passed away.

Unconfirmed reports suggest the cab may have ran a red light at the time of the crash.

The 24-year-old male passenger in the cab and the 21-year-old male driver of the other vehicle were taken to hospital in stable condition.