Schwarzenegger Speaking in Winnipeg on January 25 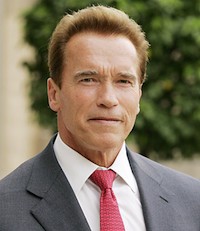 Former California Governor Arnold Schwarzenegger is coming to Canada as part of a cross-country speaking tour.

The Hollywood actor will be making stops in Calgary, Toronto and Winnipeg.

A news release from tinePublic Inc. says this is Schwarzenegger’s first round of public speaking engagements since concluding his role as governor.

The tour begins on Tuesday, January 25 in Calgary, followed by a dinner affair at Winnipeg’s Fairmont Hotel the same day. Schwarzenegger will end his brief tour in Toronto on January 26.

← Previous: Downed Lights on Portage Avenue Snarls Traffic Next: Former UN Ambassador Heinbecker to Speak at U of W →
Tags: