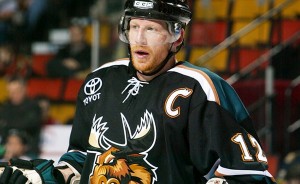 The Manitoba Moose will retire their first jersey in franchise history on February 12.

Former captain Mike Keane’s #12 jersey will be hung up when the Moose face the San Antonio Rampage at MTS Centre.

The ceremony will appropriately coincide with Mike Keane Tribute Night.

A special pre-game ceremony will pay tribute to the hockey career of the three-time Stanley Cup champion beginning at 7:30 p.m.

The first 4,000 fans in attendance will receive a commemorative Mike Keane #12 replica mini-banner.

Puck drop for the game is scheduled for 8 p.m.