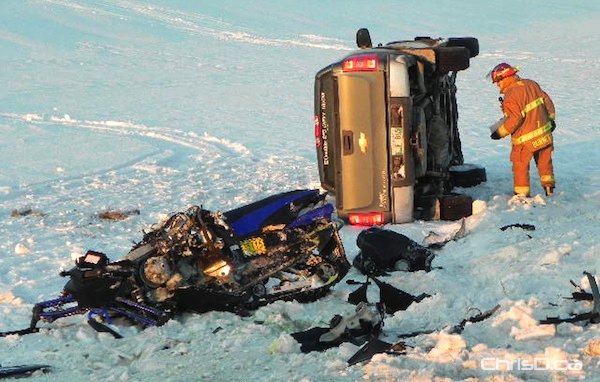 Visibility is being blamed on an accident Saturday between a Yahama snowmobile and Chevrolet Silverado pickup truck.

RCMP say the collision happened just before 4 p.m. at the intersection of Highway 59 and Provincial Road 317 in the RM of St. Clements.

According to police, the 20-year-old male snowmobile driver from Winnipeg was attempting to cross the highway eastbound when he was hit by the northbound truck driven by a 49-year-old Winnipeg man.

The truck flipped onto its side and ended up in the eastbound median of PR 317.

The snowmobiler was taken to hospital with non-life threatening injuries, while the driver of the truck was treated on scene and released.

Northbound traffic on Highway 59 was blocked for about 40 minutes while police investigated.

Alcohol is not considered to be a factor in the crash.