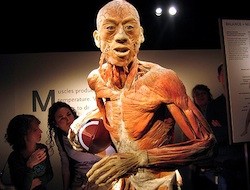 A controversial downtown exhibit is extending its hours during the final days of its run at the MTS Centre Exhibition Hall.

“Bodies … The Exhibition” began showing on September 17 and was recently extended to January 16.

The exhibit has drawn criticism for concerns over how the bodies were obtained and how the dead should be displayed. Last week, Winnipeg lawyer David Matas asked the province to seize the cadavers and bury them in Manitoba. The province’s Anatomy Act, however, does not have the authority to seize the items used in the exhibit.

Nearly 100,000 people have seen Bodies in Winnipeg, which is housed in the former home to A&B Sound on Portage Avenue across from MTS Centre.

“Titanic: The Artifact Exhibition” will move into the Exhibition Hall on February 12.