Health Officials Warn Manitobans to Get the Flu Shot 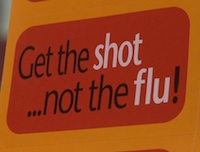 Manitobans are once again being encouraged to get the flu shot, as the province has recorded its first case of H1N1 this year.

The individual with H1N1 is in their 20s and resides in the Central Health Region. They were not hospitalized as a result.

In Winnipeg alone, there are 124 confirmed flu cases, making up for the most in any one region. Brandon and Churchill have the lowest with only two cases in each region.

Thirty-four people have been hospitalized due to the flu, making for six admissions to intensive-care units and three deaths up until January 1.

Flu shots are free for all Manitobans and are available from family doctors and public health nurses.