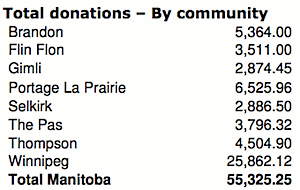 Operation Red Nose is reporting another successful year, having driven home over 3,000 people in eight Manitoba communities in 2010.

The free, volunteer-run service operates over the holidays as a way to get motorists home in a safe manner, and in their own vehicle.

“Our real success stories this year had to be Selkirk,” said Gord Gillis, President and CEO of Safety Services Manitoba. “They gave more than double the amount of rides than they did last year and their donations also increased by more than 100 percent.”

“Our service is there throughout the holiday season only, but there are always options if someone doesn’t feel fit to drive,” said Gillis. “Taking a cab, a limo, a bus or calling a friend are year-round alternatives for drivers who’ve had too much to drink.”