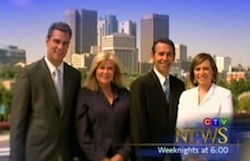 CTV News at Six is the #1 local newscast, according to the Fall 2010 BBM ratings report. (CTV WINNIPEG)

Chalk up another successful ratings period for the powerhouse television station on Graham Avenue.

BBM Canada measured viewership between October 21 and November 24, 2010 for the newscast anchored by Gord Leclerc and Maralee Caruso.

“We take great pride in being the overwhelming choice for local news in Manitoba,” said News Director Karen Mitchell in a release.