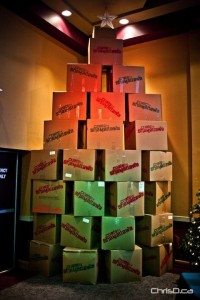 An initiative to collect enough winter coats for every child on the northern Manitoba reserve of Shamattawa has ended in success, with over $30,000 in items collected.

Coats for Shamattawa was launched over the Christmas season with a goal of providing every child 18 and under with winter wear. Four-hundred toques were collected, along with snow pants for every child 10 and under, and a large supply of children’s mittens. The items were donated by members of the Riverwood Church, which boasts a congregation of about 1,200 people.

The 36 boxes of clothing was ground shipped by Gardewine North on Wednesday, then flown to Shamattawa by Perimeter Airlines on Thursday. Eight staff members from the church will distribute the new gear to the children later today.

Retailer Sears also helped out in the drive by providing a discount on new snow pants.