Ignatieff in Town to Boost Profile of MP Candidates 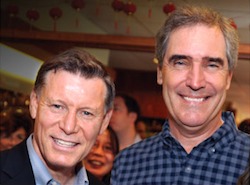 Ignatieff will hold a town hall meeting on the Liberal Family Care Plan at the Four Points Sheraton, 2935 Pembina Highway, with Winnipeg South Liberal MP candidate Terry Duguid from 3:15 p.m. to 4:30 p.m. The riding is currently held by Rod Bruinooge.

From there, Ignatieff will be joined by Saint Boniface Liberal MP candidate Ray Simard at the Southdale Community Centre, 254 Lakewood Boulevard, from 6:30 p.m. to 8 p.m. for a meet and greet. Simard was defeated in the 2008 federal election by Shelly Glover.

Admission to both events is free and open to the public.

Ignatieff is on a cross-country tour, hitting 22 cities in 11 days before Parliament resumes at the end of January. His weekend travels will take him to Oakville, Kitchener and London, Ontario on Saturday and Sunday.