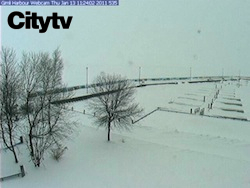 Citytv Winnipeg is now providing viewers with a look at cottage country north of the city with a live cam and weather station in Gimli.

The television station recently installed a camera and weather-gathering equipment on the roof of the Lakeview Resort on Lake Winnipeg.

The camera is able to pan and show different angles of the lakefront community, including conditions on the lake.

The broadcaster joins other stations with live cameras installed in various locations. CBC Manitoba has about six cameras perched around the city, while CTV Winnipeg has its Live Eye on top of 201 Portage Avenue.

Viewers can catch the view from Gimli during “Breakfast Television” or anytime on the RM of Gimli website.