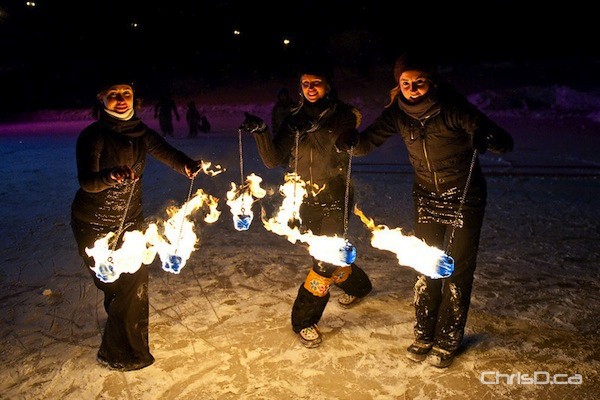 Sam, Nat and Amber of the Fire Pyxies Performance Art Collective show off their fire-flinging skills Friday, January 14, 2011 during 'Trail by Fire' at The Forks. (TED GRANT / CHRISD.CA) 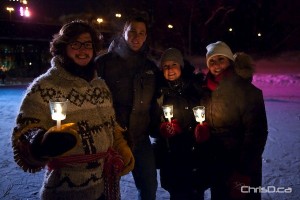 A group of friends take in the festivities Friday, January 14, 2011 at the Historic Port at The Forks. (TED GRANT / CHRISD.CA)

Although the temperatures over the weekend were chillier than most would have liked, a good portion of hardy Winnipeggers bundled up and made the best of it on the newly-opened Assiniboine Credit Union River Trail.

The fun began Friday night with Trail by Fire, the official opening to the river trail, featuring light displays and family-orientated activities at The Forks.

Saturday and Sunday also drew respectable crowds, as groups organized games of shinny on the ice and took a skate up stream on the 3.5 km of groomed ice to Churchill Drive.

Organizers said despite the windchill, the turnout was on par to what they were expecting.

We’ll get a little bit of a break weather-wise today, with Environment Canada calling for a high of -17°C. However, the cold returns Tuesday with a predicted high of only -24°C. Better get that gas line antifreeze ready.