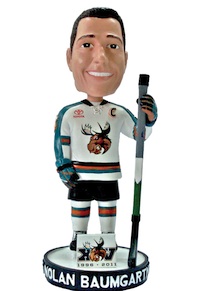 The first 5,000 fans through the doors at MTS Centre on Sunday will receive a Nolan Baumgartner bobblehead. (TRUE NORTH SPORTS AND ENTERTAINMENT / HANDOUT)

If you thought the Mike Keane and Cory Schneider bobbleheads were attention-grabbers, the Manitoba Moose are continuing the fun with Nolan Baumgartner Bobblehead Day.

The first 5,000 fans through the doors on Sunday, January 23, when the Moose take on the Abbotsford Heat, will receive bobbleheads in the likeness of the team captain.

Each bobblehead will come in a full-colour collector’s box, featuring Baumgartner in his home white uniform, equipped with stick and full equipment.

In other Moose news, the team announced Monday they have signed forward Dusty Collins to a pro tryout contract, while the Vancouver Canucks, the NHL affiliate of the Moose, recalled forward Sergei Shirokov from the team.