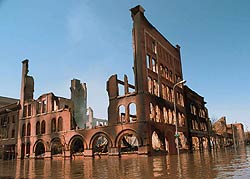 Grand Forks, ND during the 1997 flood, which destroyed most of the downtown area.

The National Weather Service in the U.S. released their 2011 spring flood outlook on Tuesday for Grand Forks and the surrounding areas.

The outlook, based on recorded levels of snow as of January 13, report Fargo has received 141 centimetres this season. The amount of snow is 40 centimetres above its long term annual average for an entire winter season. West central Minnesota, southeastern North Dakota, and portions of northeast North Dakota, including the Devils Lake Basin, are in similar situations.

Most of this area received above normal summer and fall precipitation, making for rivers and streams to freeze at record high levels.

The Devils Lake Basin is expected to rise to a new record height in excess of 1454 ft elevation, making for the community of Minnewauken, ND to be inundated, along with additional homes, businesses and critical infrastructure surrounding these lakes.

The Northern Red River Basin indicates the Red River also has a similar risk of major spring flooding, as seen during the 2006, 2009 and 2010 major flood events. Luckily, it only has a 10 percent risk of experiencing record levels which occurred back in 1997.

Manitoba’s own flood forecast will be released on January 24.

— With files from the National Weather Service