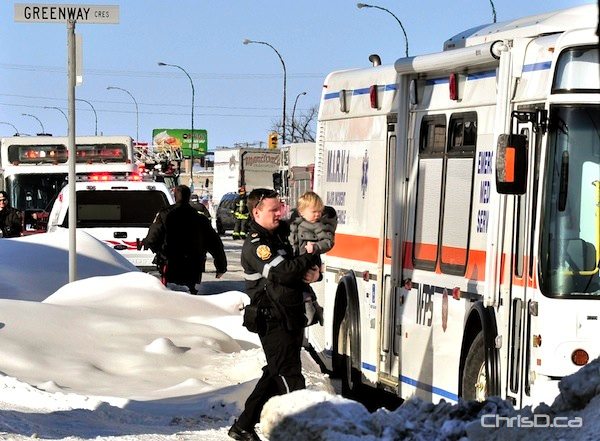 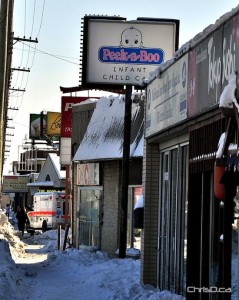 A Winnipeg daycare was evacuated Thursday morning after a carbon monoxide scare.

About 50 children and staff were evacuated from Peek-A-Boo Infant Child Care at 3138 Portage Avenue, as emergency officials investigated.

The children were taken to the nearby Boulevard Motel to keep warm, and later moved on to buses and transported to hospital to be checked out. There is no word of any injuries or illnesses reported.

An employee confirmed the daycare had their CO detectors installed about a week ago.

Parents were notified of the situation, a staff member on scene said. 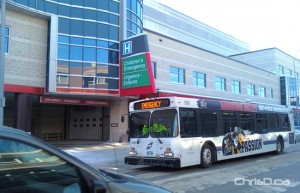 A Winnipeg Transit bus carrying children and staff sits outside the Health Sciences Centre following the evacuation of a daycare on Thursday, January 20, 2011. (WPGCAMERAMAN / CHRISD.CA)

UPDATE: 1:51 p.m. — The Winnipeg Regional Health Authority says 54 children and 19 adult staff workers were brought to the HSC. The children range in age from a few months to six-years-old.

“Those who are cleared for discharge are being discharged from the bus to their parents with the assistance of the daycare workers. Any who are found to be in need of further treatment will be treated in the Emergency Department,” the WRHA said in a statement.

The WRHA says emergency workers recorded high levels of carbon monoxide at the daycare, but all of those evacuated are reported to be in good condition.

Parents arriving to the HSC are being directed to a staging area by staff to be reunited with their children.

UPDATE: 3:45 p.m. — All children and staff from Peek-A-Boo Infant Child Care have been treated and released.