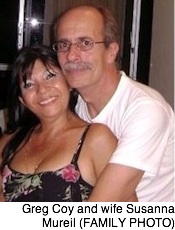 A Winnipeg man badly injured in a Panama mudslide in December has finally made it back to the city.

On Monday, the family of Greg Coy released a statement stating their father was returned to Winnipeg via air ambulance on Sunday.

Kristin, Harmony and Josh Coy have been trying endlessly to have their father returned to Canada ever since he was injured. The mudslide tragically killed Greg’s wife, Susanna Mureil, her son and his wife and their three-month-old daughter.

A fundraiser was held to get the Coy children to Panama to visit their father, who suffered spinal cord injuries and a shattered pelvis.

The family released the following statement through the Winnipeg Regional Health Authority:

We are relieved to let everyone know that our father has been safely transferred to Winnipeg from his hospital in Panama. He is currently in stable condition and very pleased that he will now be receiving care in Winnipeg.

We would like to sincerely thank everyone who has supported us emotionally and financially through this difficult journey. Your overwhelming support has helped us ensure our father will be taken care of. While we know the road to recovery will be long, we are happy he will be taken care of and that we can be close by.

We would also like to thank the members of the media who helped to tell our story. We would have never been able to return our father to Winnipeg without your help. We would like to acknowledge you each personally, but the list is so huge we fear inadvertently leaving someone out at this time.

The whole family, including our Dad, is now asking for privacy so that we may focus on his recovery.

We will provide further updates later. Until then we are asking that you refrain from contacting us either by phone, text or email so that we can continue to focus on our Dad and his road to recovery.

Again, thank you all.