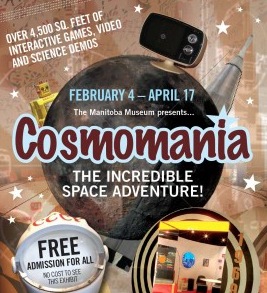 A new exhibit at the Manitoba Museum will examine the past 50 years of space exploration.

“Cosmomania: The Incredible Space Adventure” will explore Sputnik, the first satellite, and the first human flight by Yuri Gagarin on April 12, 1961 to the present-day International Space Station.

The 5,000 square-foot of recreated environments will highlight the first flights of dogs, monkeys, and humans, the “one small step” of the first Moon landing, and the space stations which led to the International Space Station of today.

“This exhibit is unique in that it puts the technological aspects of the space race in its social context,” said Scott Young, Manager of Science Communications and Visitors Experiences. “You don’t just watch the Moon landing, you watch it in the living room of a young person in New York City, surrounded by period furniture, music, and décor. You don’t just learn about the first satellite, you visit the workshop where the engineer is actually building the thing. It really takes you back in time.”

Cosmomania is free to the public and runs from February 4 until April 17 in the Museum’s Alloway Hall.