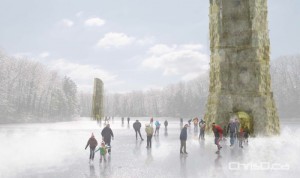 "Ha(y)ven" is one of three winning warming hut designs a The Forks that will line the river trail and keep skaters warm during the winter months. (HANDOUT)

Five of the warming huts unveiled at The Forks in late November will begin looking like their designs this week.

The architectural teams have arrived and will begin crafting five shelters around the Canopy, later to be moved to the Assiniboine Credit Union River Trail.

“It will be really interesting for everyone to come down and watch these huts being built,” said Paul Jordan, Chief Operating Officer of The Forks. “Not only will we see how theory translates into practice from what was envisioned to what is practical to build, but we’ll also see from some of these architects just how they personally fare in the climate they are building them in.”

Over 130 entries made up the handful of designs chosen from around the globe to help bring the designs to fruition.

Three huts were chosen from an open design competition with the winning designs coming from teams in Tel Aviv, Philadelphia and New York. The fourth hut was chosen from student submissions at the University of Manitoba and the fifth is from the minds of renowned Vancouver architects, and former Winnipeggers, John and Patricia Patkau.