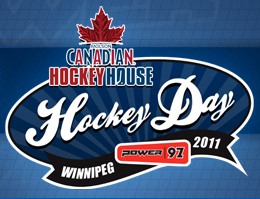 Break out the hockey gear this weekend, because the fifth annual Hockey Day in Winnipeg is slated for Saturday at Melrose Community Centre.

Power 97 and Molson Canadian are putting on the event, which promises to combine three things that Winnipeg takes pride in: playing hockey, having a good time and helping those in need.

Teams can register to play in either the competitive or recreational division competing for prizes and bragging rights, both of which will be handed out following the games at the Henderson Draft House.

“Sponge hockey is a huge part of the winter culture in Manitoba, which is why this thing sells out so fast every year,” said Phil Aubrey of Power 97. “It truly is a great way to raise money for our charity Hunger for Hope.”

Registration is $100 per team and forms are available at Power97.com or at 930 Portage Avenue.

Down at The Forks, another hockey tournament will be taking place. The River Pond Classic Shinny Hockey Tourney runs tonight from 6 p.m. to 8 p.m., Saturday from 9 a.m. to 4 p.m. and Sunday from 10 p.m. to 4 p.m. at the Historic Port.