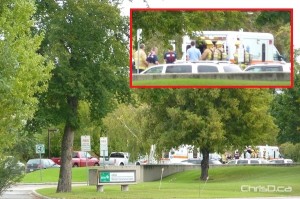 A riot breaks out at Brandon Correctional Centre on October 4, 2009. (ADAM SOBKOW/EBRANDON.CA)

The capacity to house more inmates at Brandon Correctional Centre has increased after a newly-added expansion.

The new low- to medium-security building adds 84 beds, making the facility to hold 248 inmates from 164.

The centre accommodates both sentenced inmates and those awaiting trial, and has small units to house female and youth offenders.

Construction was announced by the province shortly after an October 2009 riot at the jail, where inmates caused thousands of dollars in damage.

The new building cost approximately $5.7 million and includes four sub-units with dormitory-style accommodations. Construction is also underway on new kitchen facilities to accommodate the increase in the population and a new fence is being added to improve the overall security of the facility.