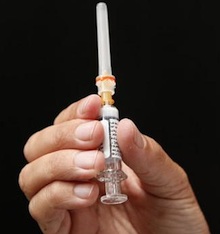 An outbreak of invasive pneumococcal disease is making its way through the city’s downtown and Point Douglas areas, the Winnipeg Regional Health Authority Warned on Tuesday.

The threat of the disease is severe enough for the WRHA to begin organizing mass immunization clinics to protect those who are most vulnerable.

Winnipeg saw 98 cases of the disease in 2010, compared to an average of 55 annually in the previous three years.

The WRHA says the elderly, homeless and those with chronic illness are most at risk.

“This is a very serious, potentially fatal illness,” Dr. Carol Kurbis, a Medical Officer of Health with the WRHA, said. “It’s important we vaccinate as many members of the at-risk population as possible.”

Clinics in the area will be available throughout February and into March. Public Health Nurses will visit shelters, soup kitchens and select housing complexes in the area for those at high risk and provide the vaccine at no cost to anyone who wants it and fits the following criteria:

Those who meet the criteria can also visit their family doctor of community health clinic to receive the vaccination.

What is the pneumococcal polysaccharide vaccine?