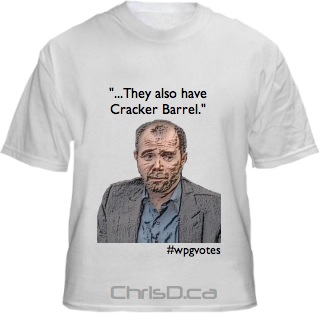 What started out as a joke during 2010 civic election campaign ended with a few extra dollars in the food budget for a local community centre.

Winnipeg Free Press city hall reporter Bartley Kives quipped a humourous line regarding Cracker Barrel during a televised CBC debate with the mayoral candidates in early October. We jumped on the idea that it would make a great T-shirt and began selling them.

We put them up for about $20 a piece, or a bit more if you wanted a higher quality cotton, and the sales started coming in.

After the cut taken by Zazzle.ca to produce and print the items, the profit was 25% of each T-shirt. A total of $40 was raised for the Luxton Community Centre, which president Carolyn Lotz says will go to buy healthy snacks for kids on weekdays.

Bart plans to deliver the donation to Luxton shortly.

If you’d like to make a donation to the community centre, cheques can be sent to: Healthy Campaign, c/o Luxton Community Centre, 210 St. Cross Street, Winnipeg, MB, R2W 5H4.