Home » News » Street Not Plowed Yet? Keep Those Vehicles at Bay

Street Not Plowed Yet? Keep Those Vehicles at Bay 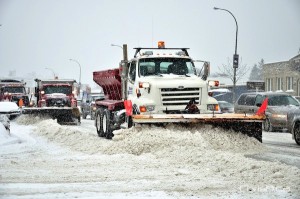 The residential overnight parking ban may have been lifted, but residents are reminded to keep their vehicles out of the way of snow plows if their streets haven’t yet been cleared.

A few residents raised the issue Thursday, saying because the ban had been lifted, homeowners began parking on uncleared streets. This made for large lumps of unplowed pavement being left over while crews maneuvered around vehicles.

The city’s Public Works department says crews are still out and about in select pockets of the city ensuring all residential streets are cleared.

The parking ban was lifted Wednesday morning after the majority of streets received attention.

Ken Allen with the City of Winnipeg says if homeowners’ streets still haven’t been cleared, it’s in the best interest to park their vehicles elsewhere until crews come by. Plowing is continuing day and night, and is rounding out a $4.5 million snow plowing operation announced last week.

Motorists parked on uncleared streets not designated as snow routes will not receive a parking ticket.

Another hot topic issue has been the windrows being formed as a result of plowing, creating hazards for motorists pulling out into traffic. The city has been addressing these over the past few days and may even receive some help from Mother Nature this weekend. With temperatures hovering around the 0°C mark, and a predicted high of 1°C on Friday, those tall and distracting windrows will start diminishing on their own.