Home » News » Protest for Egypt Planned at Legislature on Saturday

Protest for Egypt Planned at Legislature on Saturday 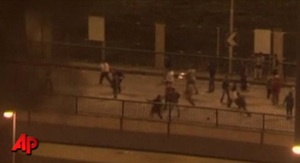 A group of Egyptians living in Winnipeg will protest at the Manitoba legislature Saturday to bring awareness to the push to end President Hosni Mubarak‘s regime in the country.

Canadians have been urged to leave Egypt, which has been thrown into turmoil in recent weeks as citizens rally against their government.

Earlier this week, two Winnipeg school teachers made the return to Canada after a chartered government flight brought them home safely.

In a Facebook-organized group, participants are asked to bring Egyptian flags and small posters to help convey their message.

The protest is set for 2-4 p.m. on the steps of the legislature.