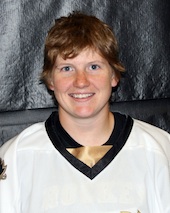 A Manitoba Bison athlete has won herself a gold medal overseas as part of Team Canada.

Hockey player Addie Miles picked up the hardware Saturday in a 4-1 win over Finland at 2011 Winter Universiade in Erzurum, Turkey.

Miles, 21, scored seven points in the tournament, with one goal and six assists, and a +13 rating during the seven games played.

Canada went 7-0 and matched their perfect record of 7-0 from the previous Universiade.

Canada defended the championship won in the inaugural women’s hockey event after winning gold by beating beat China 3-1 in the final at the 2009 Winter Universiade in Harbin, China.