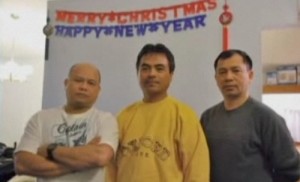 A fundraiser for three migrant workers from the Philippines seeking to remain in Canada will be held tonight at Tyndall Park Community Centre Hall.

Arnisito Gaviola, Antonio Laroya and Ermie Zotomayor, known as the ‘Three Amigos,’ were supposed to be in court Friday for a hearing on their status. That hearing has now been pushed to Wednesday, February 9.

The three came to Canada in 2007 and began working at a gas station in Alberta. They later transferred to a gas station in Thompson, Manitoba, but without the proper paper work were told they could not legally work in the country. The trio was arrested in June and haven’t been allowed to work since, putting a financial burden on their loved ones back home.

Tonight’s fundraiser will work to provide some sort of financial security for the men and their families while their case moves through the courts.

A website has also been setup at 3AmigosCampaign.com to further their cause.