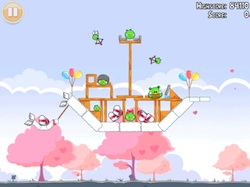 Tired of hearing about Angry Birds yet?

The popular mobile game seems to be taking an in-your-face marketing approach in recent months, launching on game consoles, in board game format, and even airing its own Super Bowl commercial.

Now the app that features little birds being catapulted through the air to cause destruction is coming out with a Valentine’s Day edition.

Keeping with the rhythm of other “holidays,” the game has previously been made available with special Halloween and Christmas editions.

The blog All Thing Digital says an update will be pushed out this week to iPhone, iPad and Android smartphones. The game is also expected to come out with an Angry Birds Rio edition sometime in March, to coincide with the release of the animated feature from 20th Century Fox.