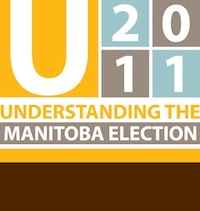 With the provincial election coming up in the fall, two University of Manitoba political studies professors are on a mission to educate and engage Manitobans about politics.

“Understanding Manitoba Politics and Elections” is the first forum series part of U2011 and will be held tonight at McNally Robinson booksellers (Grant Park) at 7 p.m.

During the 2003 and 2007 provincial elections, voter turnout was 54.2 percent and 56.8 percent respectively. Roughly six out of 10 people reported being too ill-informed about the political process to vote.

The events are free and open to the public. More details are available at UManitoba.ca/u2011.