Home » News » Winnipeg Drops in Ranking of Most Romantic Cities

Winnipeg Drops in Ranking of Most Romantic Cities 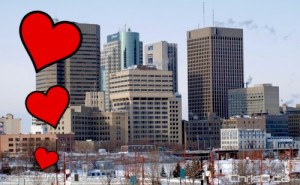 Amazon.ca has ranked Winnipeg among the Top 20 Most Romantic Cities in Canada, albeit a little lower down the list than in 2010.

Cities are ranked based on the number of online orders placed for romance novels, sex and relationship books, romantic comedy DVDs and Michael Bublé CDs since January 1.

The data was collected on a per capita basis in cities with more than 100,000 residents.

While we didn’t crack the top 10, we did fare better than Ottawa, which came in last place. Toronto, on the other hand, didn’t even make the list.

Saskatoon placed first last year, but fell to fourth this year, while Brantford is the city that holds the distinction of being the single-biggest per capita purchaser of Michael Bublé CDs. Who knew?