Home » Sports » Boarders to Compete in ‘Snow Jam’ on Saturday

Boarders to Compete in ‘Snow Jam’ on Saturday 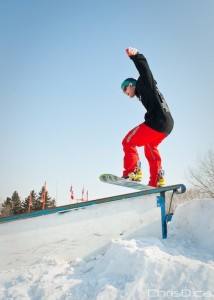 A snowboarder take part in Snow Jam at The Forks in this February 27, 2010 file photo. (RICHARD RAY / RICHARDRAYPHOTOGRAPHY.COM)

Nearly 35 snowboarders will compete on Saturday in the third annual Snow Jam at The Forks.

One of the most popular urban snowboarding events in the province, Snow Jam attracts an array of talent to perform such tricks as 360s and 5-0s.

Participants will be judged by an experienced panel in men’s and women’s opens. Over $2,000 in prizes will be awarded, with the winner receiving $1,000 cash.

To accommodate the event, the Snowboard Fun Park will be closed to outside boarders during the competition. Those interested in competing can register at the hill on Saturday at noon for $25.