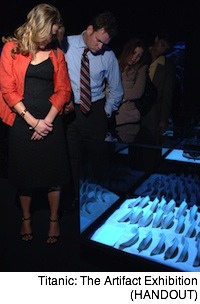 A new exhibit at the Manitoba Museum will examine local ties to the Titanic.

Titanic: The Manitoba Connection opens Saturday and will include artifacts from the museum’s collection to tell the story of who these passengers were and how they came to be on board the ship.

In January, the museum put out a call for stories from Manitobans who had a connection to the ill-fated ship.

“Most Manitobans would be surprised to learn that the province had any connection at all to the Titanic. But 30 passengers had a direct connection to Manitoba,” said Sharon Reilly, Social History Curator for the Manitoba Museum. “Twenty-three of them died in the tragedy, while some of their family members survived.”

The local exhibit will open a day later than Titanic: The Artifact Exhibition, being housed in the MTS Centre Exhibition Hall.

Tickets for the travelling exhibit are on sale at Ticketmaster. Prices range from $15.95 to $23.95, depending on the day you choose to visit.